Last week L. and I decided to take a painting trip/hike to the beautiful Uisge Ban Falls near Baddeck here in Cape Breton. And I can tell you with complete certainty that bug season has arrived. Donâ€™t be alarmed. I am going to give you some handy tips on how to cope. 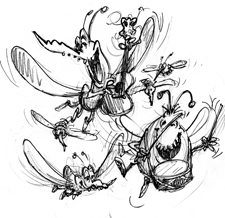 The only way to be absolutely protected is to cover yourself head to toe in a mosquito net suit with matching hat and veil. These can be obtained at any Canadian Tire store in fashionable camouflage patterns of moss green and outhouse brown. If you are too shy to make a fashion statement that is sure to cause instant apparel envy among your friends there are other strategies you can take.

I have discovered that bugs tend to treat bug spray rather like steak sauce in which you are the steak. So donâ€™t bother with it. However there are other things you can do. First of all, donâ€™t sweat. Bugs love sweat. If you insist on sweating, travel with a friend. Donâ€™t choose a friend for frivolous reasons like wit, charm, and affability. Choose someone who will sweat more than you. Obviously someone with a plump soft body who smokes like a chimney is ideal. I would suggest you give them the backpack containing the beer. Beer is heavy. I am sure you follow the logic.

On this particular trip, I was travelling with L. She doesnâ€™t smoke or drink beer. But she has always been far more attractive than me in every way. At least this is what she assures me. And the bugs would appear to verify that it is true. I have to admit that on the hike in to the falls, I was extremely comfortable. In her charming company the bugs didnâ€™t bother me a bit. When we got to the falls, I set up my easel and began to paint. L. selfishly left to continue exploring.

The bugs which had been having a parade dancing and humming musically over, under, behind and in fact all around her decided to take a rest stop around me. To make matters worse I discovered I had run out of cadmium yellow.

I continued painting and swatting. As I was finishing the painting, a bug landed on the canvas right at the center of interest, exactly where I needed the yellow. I was fed up. With way too much satisfaction for a semi-civilized grown up, I squashed it with my number 12 round sable brush. It was a big bug. Its guts oozed out – a perfect cadmium yellow. The painting was done. I like to think of it as a collaborative effort.