I stretched my legs and eased myself to my feet. Around me was the disjointed murmur of voices babbling, boots shuffling and seats popping back to upright position. We began the trek to the exit.

Just behind me and to my right I heard a loud belch followed by groans of disgust. The burp artist was a big man with a beefy red nose and a very bad hairpiece. With a look of disdain for those around him, he began to elbow his way through the crowd. A little white haired lady with a cane staggered as he pushed past her. 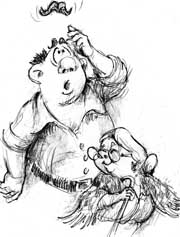 I felt my ear drums begin to hum as I stifled my rising anger. Focusing on the crown of the bullyâ€™s head I relaxed and slowly released the power. His toupee rose about six inches above his head and hung there hovering like a giant hairy humming bird. Then it began to rotate and dance in time with his movement through the crowd. He hesitated and looked around as people began to titter.

I was about to burst his belt and set fire to his shoes when a very curvaceous female figure intruded between him and my line of sight. My x- ray vision automatically peeled away her outer layers of clothing. With scorching cheeks I shut off my x- ray ability. It is my code never to exploit my super powers for salacious personal pleasure.

The sound of bubble gum popping startled me out of my reverie. Nearby some teenagers were discussing the movie we had just seen, â€śXâ€“Menâ€ť, a science fiction film about mutants with various super powers.

The crowd pushed me toward the little white haired lady with the cane. She smiled up at me as if we shared some secret joke. Then tucking her cane under her armpit she glided effortlessly through the crowd and was suddenly gone.